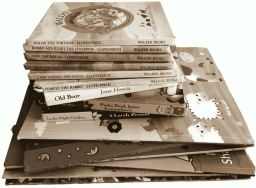 It was Sunday and Jenny Berry was still seven years old. In fact, she was going to stay seven years old for some time because her birthday was a summer-time birthday and outside the weather was very cold and wintery. She looked out through her bedroom window at the wet grass and the bare trees and tried to imagine being able to play in the garden with her friend Emily. Then she wandered over to sit on the edge of her bed. What could she possibly do? Sundays were very boring when you had to stay inside and you weren’t allowed to watch the television before Sunday lunch. Or play computer games. She looked up to see Grandma Lily standing in the doorway, holding a glass of orange juice.

‘Mummy thought you might be thirsty,’ said Grandma Lily. She walked over and gave Jenny her drink then sat down beside her: ‘What have you been doing up here, all on your own?’

‘Nothing? My goodness, what a waste of time!’ Grandma Lily hated wasting time.

‘But Mummy says I can’t play my computer games before lunch and I can’t watch TV.’

Grandma Lily frowned: ‘That’s because too much TV makes you stupid. It stops you thinking.’

‘But Daddy’s allowed to watch TV before lunch,’ complained Jenny.’

‘Yes, Jenny dear,’ smiled Grandma Lily. ‘But Daddy’s a grown up and it doesn’t matter if he doesn’t do any thinking before lunch.’

Jenny laughed. Then she noticed Grandma Lily looking around her bedroom. It was nearly tidy today. Apart from a few things on the floor. ‘Grandma, there’s nothing to do!’ moaned Jenny.

Grandma Lily gave Jenny one of her looks: ‘Jenny dear, when I was seven years old there were no computer games and there was practically nothing on the TV. What do you think we used to do with ourselves while we were waiting for computers and TVs and DVDs to be invented?’

Jenny shrugged. She sipped her orange juice and watched Grandma Lily wander over to the chest of drawers and pick up a book.

‘Of course, one of the things that we used to do was read,’ said Grandma Lily. ‘Isn’t this the library book you chose last week?

‘Have you finished it?’

Jenny shook her head. Grandma Lily raised her eyebrows: ‘Have you started it?’

‘No. I haven’t had time, Grandma.’ Jenny knew that answer would make Grandma Lily complain. And it did:

‘Good gracious, Jenny! You haven’t had time? You’ve had all the time that fits in between school time and suppertime and bedtime every day for a whole week.’

‘But after school is when I’m allowed to watch TV. And on Tuesdays and Thursdays I have homework.’

Grandma Lily carried the library book over to the bed: ‘Jenny, do you realise that this library book belongs to everyone? And it’s kept at the library so you and everyone else can read it. The library probably only has one copy of it, so when you borrow it and bring it home, it means that everyone else that it belongs to can’t read it until you take it back. And here it is and you haven’t even looked at it!’

‘I did look at some of the pictures of horses and ponies when I got home,’ said Jenny.’

Grandma Lily put the book down on the bed: ‘Well, Jenny,’ she said, ‘why don’t I go and help Mummy with lunch and why don’t you read this lovely book so that you can tell me about it. And then one day after school this week we’ll take it back to the library so someone else can read it. And we’ll borrow a new one. Perhaps even two new library books.’

Jenny thought about that for a moment then she smiled. Then she started to read. And by the time lunch was properly ready, Jenny had read her library book right the way through. And she’d studied all the pictures. So now she knew everything there was to know about horses and ponies. She carried her book downstairs and laid it beside her plate. Jenny’s mum glanced over at her: ‘Jenny, isn’t that your library book? Be careful you don’t get gravy on it. It’s not yours.’

Jenny smiled at Grandma Lily: ‘Yes it is mum, it is mine. All the books in the library are mine, but they’re everyone else’s too.’ She tucked her book down under her chair. ‘It’s like I have thousands and thousands of books, but when I’m not reading them, loads of other people can read them instead.’

‘That’s absolutely correct, Jenny!’ said Mr Berry. ‘Can anyone see my glasses? I can’t think where I last had them.’

Jenny sniggered into her hand: ‘That’s because you watch too much TV, Daddy.’

‘Quite right, Jenny,’ said Grandma Lily. She pointed her finger at the top of Mr Berry’s head: ‘And by the way, Mr Berry, you are wearing your spectacles on your head.’

That afternoon Grandma Lily went home to her cottage and Jenny watched some TV, but after a while she carried her library book up to her room and read it again because this week she was going to take it back to the library. And although it would still belong to her, somebody else would probably need to be reading it.

Monday came and then Tuesday. And then on Wednesday Grandma picked Jenny up after school to take her to the library. She helped Jenny into the car and watched her fasten her seatbelt:  ‘Jenny, did you remember to bring your library book to school today?’

Jenny frowned. She really hoped her mum had remembered to pack it in her school bag. But she couldn’t remember seeing it when she had taken out her lunch box. She reached into her bag to check. But her library book was not there.

‘Oh dear, Jenny,’ said Grandma Lily, ‘Isn’t your library book in your bag? Do you think you left it in your classroom?’

Jenny shook her head. ‘I don’t think so. It wasn’t in my bag at lunch time. Phone Mummy and ask her if she put it in my bag this morning.’

Grandma thought for a minute. Then she said: ‘Mummy’s probably still in town after the hairdressers. But I think Daddy’s working at home today and looking after baby Wills. We’ll phone and ask him if your book’s there.’

Jenny groaned: ‘Grandma, that’s hopeless. Daddy can never find anything if Mummy’s not there.’

‘Well, we’ll phone anyway, said Grandma Lily. ‘And, Jenny, you really ought to take special care of things that also belong to other people. If your library book is LOST then nobody will be able to read it, will they?’ Grandma Lily took out her phone and called Jenny’s father and asked him if he had any idea where Jenny’s library book was. Jenny listened. She couldn’t hear what her father was saying, but she could hear baby Wills crying in the background. After a few moments Grandma Lily started to smile: ‘OK, excellent!’ she said. And then she smiled even more: ‘And, Mr Berry, if you turn off all that noise on the football channel and play some quiet music instead, then I’m sure Wills will stop crying and go back to sleep.’ Then she slipped her phone back into her pocket.

‘What did Daddy say?’ asked Jenny.

‘He said that your book is definitely not in the house.’

Jenny sighed and shook her head: ‘Oh no! My library book is LOST. Will the library let me borrow more books if I don’t take the old one back?’

On the way to the library, Jenny tried to think where she had last seen her library book. It was hopeless, she couldn’t remember seeing it that morning. She looked at her grandma, who was concentrating on parking the car in the library car park: ‘Grandma, do you think library books go to Raggedy Lyme with all the other lost things?’

‘Well, Jenny, say the rhyme and see what you think.’

So, Jenny said the rhyme:

‘There’s a space in a place called Raggedy Lyme,
Full of errors and terrors and wasted time,
Where your LOST things can hide, until they decide,
That you’ve earned their return from Raggedy Lyme.’

Then she frowned: ‘But, Grandma, if the library book is LOST, then it’s lost just because of me. But it belongs to everybody. So it wouldn’t be fair for it to hide in Raggedy Lyme because it wouldn’t only be hiding from me, it would be hiding from everyone else as well.’

‘Jenny, that’s a very good reason why it’s important to look after things that you share with other people.’

Jenny sighed and took a last look in her bag before getting out of the car. She hoped that some kind of magic might have made the horses and ponies book be in there after all. But it was still not there. Grandma Lily shook her head:

‘Come on Jenny, let’s go and speak to the librarian.’

So they hurried inside out of the cold and Grandma Lily told Jenny to go and choose another book while she walked over to speak to the lady behind the desk. Jenny hoped that she would be allowed to borrow another book even if she hadn’t brought the horses and ponies one back. She wandered through to the children’s section. But when she got there and looked along the shelf on pets and animals, what do you think she found? It was her LOST book about horses and ponies. She eased it out and checked that the inside was the same as before. And it was.

Suddenly, Grandma Lily was standing behind her smiling: ‘The librarian said that it came back this afternoon, just a short while ago. Are you going to borrow it again?’

‘No,’ laughed Jenny. ‘It’s someone else’s turn to borrow it now.’

‘So, Jenny dear, what book are you going to borrow this week? Shall we have a look?’

Jenny put the horses and ponies book back in the right place and then she looked along the shelves. She considered a book about cats but decided to choose one about animals that live in the desert. Then on the next lot of shelves there were story books. After a moment or two, she pulled out a tall book called Alice in Wonderland. It was about a girl called Alice who followed a white rabbit and fell down a rabbit hole into a magical land: ‘Grandma,’ she said, ‘this story was on the TV!’

Grandma nodded: ‘Jenny, that story was written into a book more than a hundred years ago, long before TV was invented. I used to read it when I was your age. That’s what’s good about writing stories into books. It makes them last forever.’

‘Can I borrow it, Grandma? I’ll read it to you, if you like. And then you can see if you’ve remembered it properly.’

So, they took the desert animal book and the story book to the desk and borrowed them and then Grandma Lily suggested they go to the cafeteria and have a hot chocolate before they went home. Jenny thought that sounded like a very good idea. And who do you think was sitting at a table waiting for them? It was Mrs Berry!

‘Mummy!’ cried Jenny. She hurried over and hugged her. ‘When did you get here?’

‘Oh, just a short while ago,’ said Mrs Berry.